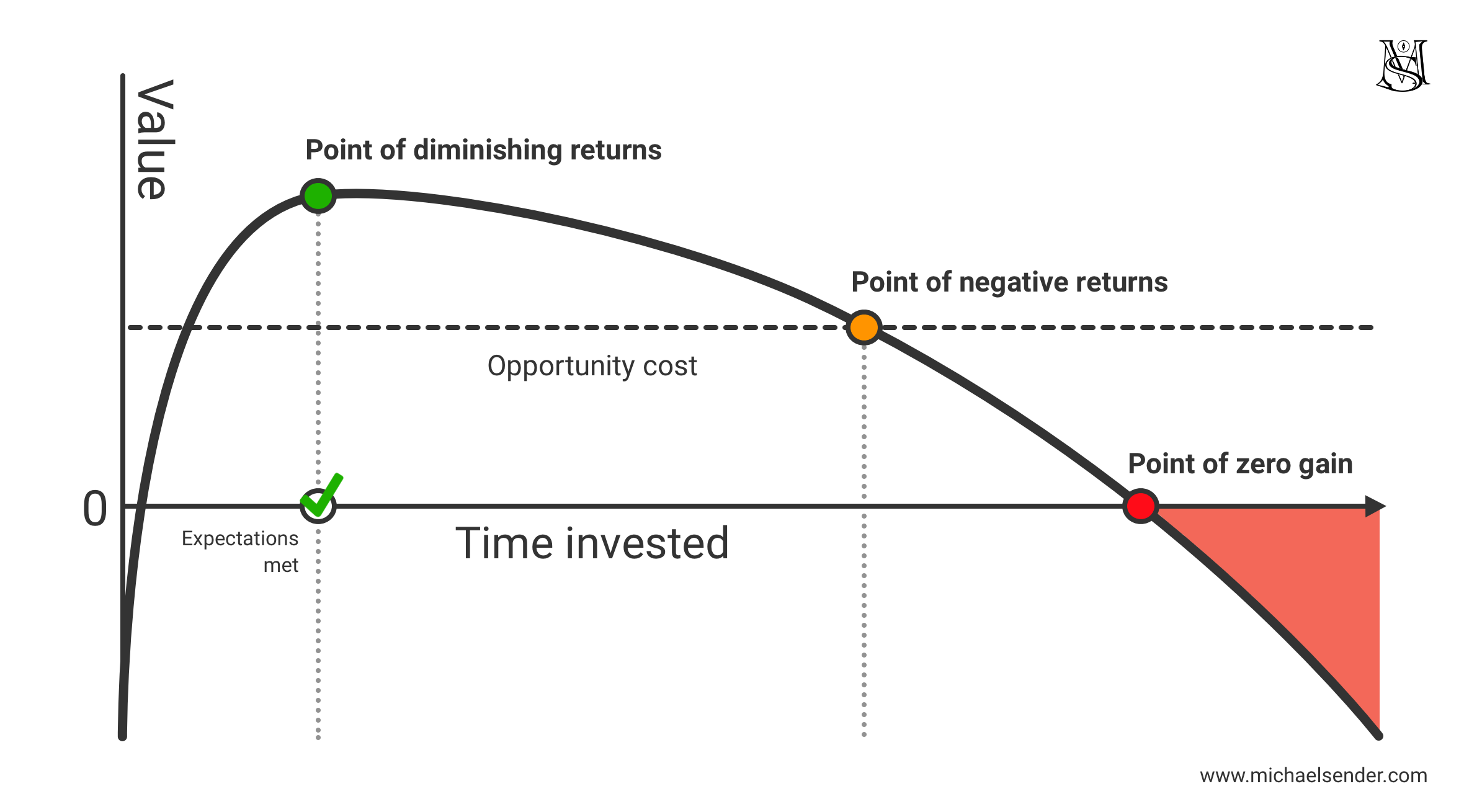 When forcing my sleep-deprived student mind through the terribly dull subject of microeconomics during my university years, one concept that really stuck with me was the law of diminishing returns. Believe it or not, this concept provides a brilliant illustration of how perfectionists differ from other people.

It is based on the idea that, in any value chain, an incremental increase in input leads to a proportional increase in output, but only up to a certain point. Past that point, the increments of output increase will grow smaller for every increment of input. Thus, past a certain threshold, the returns on every added unit of input/investment/effort are diminishing.

If you think about it, this law applies to basically any human effort. Up to a certain point, the more time and effort you invest in doing something, the more you get done. But eventually you will get exhausted, hungry, bored or start running out of ideas. Your productivity will start dropping and you’ll get less done for every new hour of effort added.

The same applies to the value of whatever you are doing. Before you’ve even started working on a task, its value is zero. Then you gradually build it up by investing time and effort. Sooner or later you will reach a point where the added value from every new hour you invest will start diminishing.

Suppose you are creating a sales presentation. At some point it will deliver the message so well that adding more content will only have a marginal effect on the client’s perception of your message. This is what’s called the point of diminishing returns. If you keep improving the presentation further, you will eventually get to a point of negative returns, where the value of additional improvements is lower than the opportunity cost of the time and effort you put in. The typically perfectionist habit of adding images and design elements to every empty space for the sake of symmetry is one common example of this.

The point of diminishing returns is the closest thing there is to a universal “good enough” level. Going beyond this point is usually what defines exceptional performance. It’s what makes high achieving individuals stand out and shine. But it is also very costly, as you get increasingly less for more.

The problem with perfectionists is that they not only stretch every task beyond the point of diminishing returns, but also tend to go far beyond the point of negative returns, paying double or triple for the value they get in terms of time invested. Since time isn’t stretchable (you only have 24 hours in a day), perfectionists constantly find themselves inside an impossible equation, ending up overwhelmed and overworked.

One obvious way of getting out of this vicious circle is to lower your bar to “good enough” and never go past the point of diminishing returns, which is what most people will be telling you to do. But that would basically mean trying to become Average Joe, never exceeding anyone’s expectations, and that’s just not who you are. You’re a high achiever and you want to be perceived as one. But you also don’t want to get buried.

So, if you can’t go beyond the point of diminishing returns on everything you do, but you don’t want to be Average Joe either, then you’ll have to make some tough choices and smart priorities in order to effectively calibrate your standards to every given context.

First of all, you really want to have an idea about where that point of diminishing returns might be for each task or project you embark on. In the tongue of simple mortals this means clarifying what’s expected of you. And because you are a perfectionist and have a strong tendency towards inflating expectations, I want to challenge you to always envision the absolute minimum that may be expected of you in every given situation.

How do you know what’s expected of you? One simple way is to ask whoever has the expectations. Ask your boss/colleague/client what level of detail and accuracy they expect in your delivery. Would they rather have it sooner or better? Is it intended for internal or external use? Does it have to look good or just provide value?

If you can’t ask anyone – use benchmarks. How good was last year’s delivery and how was it perceived? Has someone else done something similar recently? How picky is the person you are trying to please?

Now that you have a feeling for what the expectation level is, you can define what your target level is going to be in relation to it. Do you intend to meet the expectations or to impress? Your intuitive answer will always be the latter, but this is where you must restrain yourself.

Remember: you only have the time you have, which means that you cannot afford to overperform at everything. Delivering above expectation on one task likely means underdelivering on another, or not delivering at all on a third.

So you need to pick your battles. Where do you get the most value out of delivering above expectation? Usually it’s the stuff that is most visible. Nobody will give you a promotion for sorting your desktop folders neatly or clearing up technical debt in your backlog. But closing a big deal, delivering a stellar presentation at a corporate event or getting fantastic consumer reviews on the new product you launched might get you quite far.

So if you mean to set your bar high and go beyond the point of diminishing returns on some tasks – let it be the tasks where your performance is most visible to key decision makers.

Mark the tasks in your to-do list which you have picked for overperformance. For each such task, mark another task where you are prepared to deliver below expectation or postpone/remove that task altogether. This way you will be able to balance your ambitions with your reality.

Use checkpoints to assess where you are on the curve

Once a perfectionist has set course at overperformance there’s almost no stopping them. That’s why you need to continuously monitor your position on the returns curve. You want to go beyond the point of diminishing returns, but you also want to stop before you get into the negative returns zone.

I recommend creating regular checkpoints, starting when you’re approximately half way done and repeating at 10 percent point intervals. At the checkpoint, ask yourself:

1. Does what I’ve done so far meet the expectation level?

If not, ask yourself:

2. What else is required to meet the expectations?

Don’t ask “How can I make this better?”. There are thousands of ways of improving everything, but your first goal is to meet the expectations. Identify the answer, list the required subtasks and focus on them until the next checkpoint. If you’re not sure, ask a colleague or friend – someone whom you consider competent, but not a perfectionist.

If the answer to question 1 is “yes”, and it’s a regular task, then you’re done. Save and exit.

If it’s a task you’ve marked for overperformance, then ask yourself:

3. What is the least costly thing I can do to exceed the expectations on this one?

The cost is your time. Identify the answer, list the required subtasks and focus on them until the next checkpoint, during which you should ask yourself:

4. Does what I’ve done so far exceed the expectation level?

If not, ask yourself:

5. What else do I need to do for my delivery to exceed the expectation level?

You might ask “how much should I exceed the expectations?”. My shortest answer would be “as little as possible”. You see, the distance between the point of diminishing returns and the point where over performance becomes noticeable is usually quite small. In other words, it usually doesn’t take much to get a delivery from “as expected” to “above expectation”. Taking it from “above expectation” to “way above expectation” is typically way harder and takes more time than it’s worth. I would advise you to never go there unless it is something your life or career depends on or if your performance will be evaluated in a fiercely competitive environment, like a contest or when bidding for a large contract. Most of the time “above expectation” should be enough for you to shine, and if you stretch it further, you’ll just be venturing off beyond the point of negative returns (read: “wasting your life”).

The Dreaded Point of Zero Gain

Another word of warning: perfectionists sometimes deliberately go beyond the point of negative returns on very important tasks just to be sure they haven’t underestimated the expectations. Even if you are working on a project so important that nothing else matters, going too far beyond the point of negative returns can get you in trouble. There is one more point there which you really don’t want to cross, which I call the point of zero gain. Going beyond this point means that every additional effort will actually harm your delivery.

Going back to the example of you preparing a sales presentation, there is always a risk you may end up adding too many slides to your deck. Not only will you have wasted precious time making excessive slides. You may also create a risk of running out of time before having presented the most important slides, which may damage your overall performance during the pitch.

Avoid this by being clear about the expectation level and running continuous checkpoints as you go along.

We use cookies on our website to give you the most relevant experience by remembering your preferences and repeat visits. By clicking “Accept All”, you consent to the use of ALL the cookies. However, you may visit "Cookie Settings" to provide a controlled consent.
Cookie SettingsAccept All
Manage consent

This website uses cookies to improve your experience while you navigate through the website. Out of these, the cookies that are categorized as necessary are stored on your browser as they are essential for the working of basic functionalities of the website. We also use third-party cookies that help us analyze and understand how you use this website. These cookies will be stored in your browser only with your consent. You also have the option to opt-out of these cookies. But opting out of some of these cookies may affect your browsing experience.
Necessary Always Enabled

Performance cookies are used to understand and analyze the key performance indexes of the website which helps in delivering a better user experience for the visitors.

Analytical cookies are used to understand how visitors interact with the website. These cookies help provide information on metrics the number of visitors, bounce rate, traffic source, etc.

Advertisement cookies are used to provide visitors with relevant ads and marketing campaigns. These cookies track visitors across websites and collect information to provide customized ads.

Other uncategorized cookies are those that are being analyzed and have not been classified into a category as yet.